A large line of Azerbaijani armoured vehicles was seen on Friday entering the Aghdam region of Nagorno-Karabakh following a Russia-brokered peace deal that will see the handover of territory to Azerbaijan. Meanwhile, Russian peacekeeping forces controlled traffic in the Lachin corridor, as they continue to assist Armenian refugees to Stepanakert.
The cease-fire was set after six weeks of fighting between ethnic Armenian forces and Azeri troops over the enclave of Nagorno-Karabakh and surrounding areas.
Under the terms of the peace deal, control over the enclave's main city will stay with ethnic Armenians despite them being forced to cede other lands to a victorious Azerbaijan. 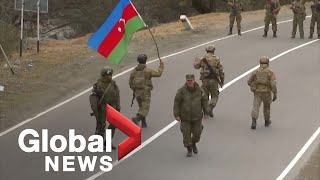 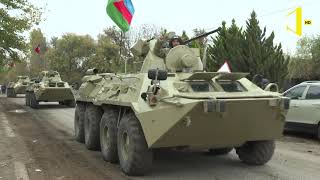